As soon as I heard that running the Grand Canyon Rim to Rim to Rim was a thing, I knew I had to do it.  It’s been on my list of goals for a while now and this year I finally made it happen.

Disclaimer: Running the Grand Canyon Rim to Rim to Rim is tough!  Although, with proper training and gear, it’s not impossible.  Grand Canyon National Park sees tons of visitors in a year; so, as with any adventure in a National Park, do your best to cause as little impact as possible.  Be polite to other folks experiencing the canyon.  Just because you are running doesn’t make your experience any more important than others.  Announce yourself to hikers and always yield to folks coming uphill.  Pack out everything you take down and don’t forget to have fun.

My wife and I have both worked in the outdoor industry and we have very similar gear.  One of us will purchase a nice piece of gear, the other one will be jealous and then purchase the same thing in a different color.  So when we enjoy the outdoors together, we look like a sponsored team of some sort.  We are not sponsored, but we do call ourselves “Team Thienel.”

For this particular adventure, Team Thienel flew into Phoenix and we drove North to Sedona to do some acclimating and fun running.  Sedona is an awesome place with enough Trail Running, Mountain Biking, and Rock Climbing to last a lifetime.  One of our particular favorites was Wilson Mountain.

In the Red Rock Secret Mountain Wilderness, Wilson Mountain is the highest peak at 7,122 feet.  The trail leading up to the peak is steep and rugged.  We got pretty lucky and saw very few people.  Living in Nashville, we don’t get many opportunities for real elevation.  Although the altitude was mild, we were feeling it in our flat-lander lungs.

After a couple days running and eating Mexican food, we headed up to the Grand Canyon.  I had considered changing the day I would run down into Canyon because the forecast wasn’t looking so hot.   Turns out the forecast was off by a day. So when we arrived it was very cold and windy.  It had been about 5 years since I had been to the Grand Canyon and I had a picture in my mind of what it looked like.  When I actually showed up and stepped up to the edge, that picture in my mind was nothing like the real thing.  This view can definitely stir up some emotion.

We snapped a few photos, took in the view, and then headed back to the hotel to pack up and go to bed early for our 4:00am start the next day.  I really like ultra marathon races, but my favorite outdoor pursuit would be long, unsupported runs in the wilderness.  I have done plenty of long runs, but this was my first time doing 50 miles unsupported.  I tried to go as light as I safely could.  I went back and forth on whether or not I would run in my Salomon S-Lab vest or the Ultimate Direction Fast Pack 20.  I decided to go with the Salomon Vest and stay light.  The weather was perfect with a high of about 65, so I didn’t need a ton of layers.

Some highlights to point out that made the day more comfortable:  The Petzl Nao headlamp is my favorite headlamp ever – its comfortable, brighter than I need, and the Reactive technology gives it a great battery life.  A friend let me borrow the Spot GPS device.  It has a tracking feature that allows friends and family back home to follow your progress via the web, as well as send out pre-written text messages when you so choose.  Also, if things go way bad wrong you can send out a distress signal.  I will probably purchase one of these for future long runs.  There was snow at the North Rim, but nothing to warrant the Micro Spikes, but better safe than sorry.  Body glide was my best friend, I re-applied several times to prevent chaffing.  The GU flask was perfect for this run since I needed to pack everything out.  I ate GU every hour, so this system saved me from having to pack out 10 or 15 sticky GU packets.

Our alarm went off at 2:00am and I jumped right up with excitement.  I am usually a cranky zombie in the mornings, but on days like this I have no problem getting up. I had read that the mule trains start down the canyon at 5, hence the early start.  I also wanted to be finished before the sun went down.  We packed up our things and drove to the Bright Angel Trail head.  I chose to run the Bright Angel Trail to the North Kaibab trail and back the same way.  This route is slightly longer but not quite as steep as running the South Kaibob Trail.  My wife, Amber, was running to the river and back and we thought the Village near the Bright Angel Trail Head would be a cool place for her to wait for me (and also eat pizza). 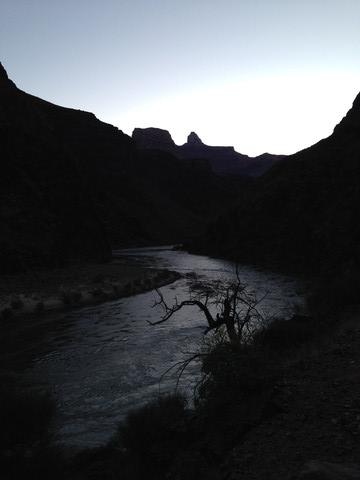 We got to the trail head and tried to take a selfie, but quickly gave up because it was dark and also 18 degrees.  It was really cool to have this part of the park, which is usually very crowded, all to ourselves.  We both had an overwhelming feeling that we were doing something wrong – like we were sneaking into the Grand Canyon or something.  My original plan was to run with her to Indian Gardens (about 5 miles), but we were having so much fun that I decided to hang back with her and run together all the way to the river.  I’m so glad I did.  We got to the river just as the sun was coming up.

We said our goodbyes at Bright Angel Campground just on the other side of the river, and I headed  off for the North Rim.  The next 10 miles were beautiful and easy and I was feeling really strong.  That changed as soon as I started to climb.  I definitely underestimated how hard climbing the North Rim would be.  I knew it would be hard, but I had to do some serious work to get it done.  I had never been to the North Rim before and the views were truly spectacular.  Getting close to the serious climbing, this one was one of my favorite views:

I topped out feeling a little slow but in overall good shape.  I knew now that I could finish strong and do the second half faster than the first.  At the North Rim Trail Head, I met a guy named Brian and his either 3 or 4 kids (after running that much details get blurry for me.)  The youngest of his kids was 5 and they were doing R2R2R in 3 days.  Pretty cool! I wish I could have done that when I was 5!  Brian’s girlfriend had opted to stay in the Cottonwood Campground closer to the bottom rather than hike all the way to the North Rim.  Brian was nice enough to take my picture and, in return, I would deliver a message to Dawn, his girlfriend, that he and the boys would be back down later that afternoon.  So I finished my snack and headed back.

One of the real challenges was planning where to fill up with water.  Most folks choose to run it a little later in the year, more like late April or May instead of late March .  The North Rim doesn’t open until May 15th.  You can always check the back country office for updated water availability so you can plan accordingly.  Because of the cool weather (high of around 65), I was able to get away with not filling up at the North Rim.  If it was any hotter, I would have taken some sort of water filtration.

The rest of the run was pretty uneventful.  As I got closer, I tried to push it to go faster so Amber wouldn’t have to wait as long (and maybe she would have a piece of pizza and a coke waiting for me.)  For me, the later hours of an ultra seem to pass very quickly.  It seems like every time I looked at my watch another hour had passed, and it was time to eat again.  I had a few really dark moments, but I forced my self to sit down, empty the sand from my shoes, and eat something.  Then I told myself that I chose to do this, it’s fun, and this is a really beautiful place.  As I got closer to the South Rim, I started seeing more and more people.  By the time I got to the top, I had to push through a crowd to reach Amber.  It took 13.5 hours total, but to me it seemed like only a couple of hours had passed.  This is one of my favorite experiences ever, I really liked the fact that I could see most of the trail that I ran when I finished.  Maybe next year I will do R2R2R2R2R…

View all posts by ctransit

This site uses Akismet to reduce spam. Learn how your comment data is processed.